This is a Python script which allows you to use the SKCC Sked page with any IRC client.

The SKCC Sked Page is a web based application that allows members of the Straight Key Century Club to coordinate on-air contacts. Since I always have an IRC client running anyway (which allows easy access from both PCs and mobiles), I decided to write a small bridge which translates the messages from the Sked Page into IRC and vice versa.

First create a configuration file called ~/.config/skcc-irc/config.json that contains at least the following to configure your callsign and SKCC Sked Page password.

Then launch the SKCC IRC bridge and an IRC server with the launch script skcc.sh. It creates a GNU screen session called "SKCC" with two sub-screens for the two programs.

As soon as you have done this, you can use your favourite IRC client (e.g. irssi) to connect to irc://localhost:6655/skcc. Use your own callsign as your nick name.

Once connected, you'll find all users logged in on the SKCC page, including your own callsign (prefixed with an underscore, e.g. _DJ5CW) plus one user called skcc.

Apart from normal chatting, you can use the following commands (all commands are prefixed with an exclamation mark):

A screenshot (with irssi as the client) is shown below. 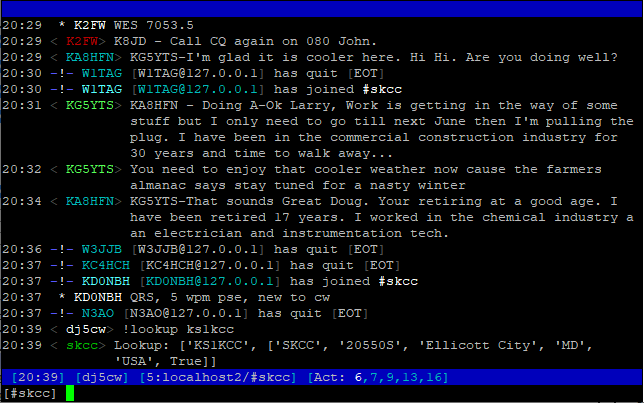 Currently the following functions are not implemented yet:

PMs are implemented but there are some things that are working differently from the web chat:

The reason for this is simple: Only users who are on the "active" list are joined in the IRC channel as virtual clients, and therefore you can only communicate with then. The SKCC chat page however allows sending direct messages even by and between inactive users, which is not how things work on IRC.

The following is required to run the SKCC IRC bridge.

On a freshly installed Ubuntu 22.04 machine, the dependencies can be satisfied like this: